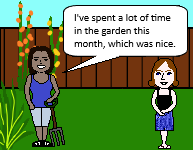 This is a photo of my friend Sarah, who got married in April.
(who = Sarah)

Agatha Christie, whose books have been translated into many languages, died in 1976.
(whose books = her books)

Last night my sister ate a steak, which was very unusual.
(which = my sister eating a steak, not the steak - maybe she's vegetarian!)

Teachers, who work very hard, should get paid more.
(non-defining relative clause: all teachers should get more money, they all work hard)

Using a defining or non-defining relative clause (RC) can change the meaning of the sentence (as in the teachers examples above). In addition, the rules about who, which and that are different..

1. Defining RCs can use that instead of which/who. Non-defining RCs never use that.

The artist who/that sang "Holiday" in the 1980s is still making music.
(Defining RC. The information about the song helps us to know which singer we are talking about We can say who or that.)

Madonna, who sang "Holiday" in the 1980s, is still making music.
(Non-defining RC. We know who Madonna is, so the information about the song isn't necessary. We can't say that.)

This is Andrew, who I'm going to marry.
(Non-defining RC. Who is always necessary.)

I'm also on Facebook. When I put new activities on this site, you can find out through Facebook updates.